My child climbs on the table and I tell him/her not do that. But s/he does it everyday. I tell my child, “Don’t get on the table, “ and bring him/her down. But s/he seems to enjoy the whole thing like a game and keeps doing it many times. I just don’t know how to warn him/her. 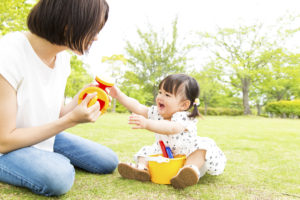 In such a situation, you can change it to another type of playing such as playing with another toy, reading a picture book or drawing. Also when a child is full after having a meal, s/he would drop his/her spoon and have it picked up by his/her parent. S/he wants to play with Mum and Dad.

When your child tries put his foot up on the table but stops doing it after you tell him/her “Don’t get on the table,” please tell your child, “You’re a good boy/girl. You listened to me,” and praise him/her for stopping what s/he tried to do. Any child finds it more fun to be praised, not scolded, and to be attended to. So, you should try to change the situation to a type of playing where you can praise your child, instead of your child telling “Look at me!” by climbing the table. It is just that your child is looking for some kind of playing.