* This article is an excerpt from and is edited based on a lecture & consultation meeting titled “How to Communicate with and Discipline Small Children” which was held in 2019.

My child is self-assertive, and she is adamant about not eating anything she dislikes. If I make her eat, she will spit out the food. She won’t eat fruits or any of the western-style food like stew, and I don’t know what to do. She’s in a pre-school class for 0 year-olds and teachers have been considerate of her food preference, but once she begins class for 1 year-olds, there will be snack time, and if she can’t eat any of the snacks, I’m worried that she won’t be full. 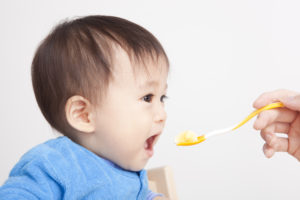 Children will eat different things as they grow, so you can expect her to eat eventually.

Eating should be enjoyable. If she enjoys eating, she’ll have more appetite. But when she’s forced to eat, she will get nervous and it would further discourage her from eating. So, telling her to “eat this, eat that” will have quite an opposite effect.

There is a woman I met who was in her late twenties; the only vegetable she was able to eat was shiraga negi (thinly sliced Japanese green onion). Her mother wanted her to grow up to have no food dislike, so her mother made her try all sorts of food when she was little. It made her not eat vegetables at all. But, as much as her mother wanted her to eat vegetables, she never prepared shiraga negi for a child who was around 2-3 years old. As the woman was never forced to eat it, it became the only vegetable she could eat. She was forced to eat everything, but she ended up rejecting everything. Her heart rejected them.

As such example shows, it’s better to stop making efforts to make your child eat.

That’s how much of a psychological effect eating has on children.

The best thing to do is for the father and the mother to enjoy eating meals in front of their children.

Children generally want to copy grown-ups, so when the father and the mother have conversations like “I don’t get why the children don’t think this food is so tasty”, children will start to eat them because they’re curious why their parents think this bad tasting food is good.

Also, when your child eats something that she doesn’t like, even if it’s a bite, compliment her by saying “good job for taking a bite” or “it makes me happy that you ate the food I cooked”, etc.

Making their mother happy is an enough motive for children. Acknowledging your child’s food preference and your child’s feelings when she eats things she doesn’t like will encourage her to eat, as well as your child understanding that making an effort to eat one bite or even half a bite will make you happy.

Telling your child that it makes you happy to see her take a bite should positively affect her eating behavior, so you should enjoy the process of teaching her the pleasure of eating food.