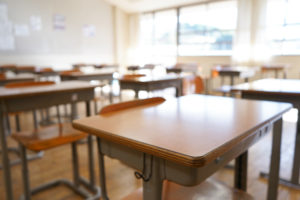 Why is “truancy” on the increase?

Do you know the definition of truancy?

Currently in Japan, truancy is defined as being absent from compulsory education at a primary (shogakko) or secondary school (chugakko) for the total of 30 days a year, even if not consecutively. If a child is absent for two or three days a month on average, s/he would be suspected as being truant.

The history of “truancy”

The Japanese Ministry of Education started to take statistics of children who refuse to go to school in 1966. Until then, children not attending school were seen as natural, not as a problem.

Until then, children were a handy labor force who worked in the labor fields of agriculture, fisheries, coal mines and so on. So, it was natural for them to be absent from school.

Initially, they did regard 50 days of absence from school a year as problematic.  However, professionals then said, without much evidence, that it was because “the parents brought up the child in a bad way” or “the child had personality traits that made him/her difficult to come to school”. Therefore, it was regarded that home was responsible for children’s absence from school.

In the late 1980s, school absenteeism began to increase. Now, it couldn’t be explained that it was caused by the way parents brought up their children. Why did the change happen? It was the school education getting stricter. The number of children was decreasing and the contents of the education were becoming more difficult. The guidance for good grades and for discipline both got strict. Children were often scared or tired about these. This started in the late 1980s.

In the beginning of the 1990s, the Ministry of Education asked a group of professionals for an advisory report. Then, it was reported that the issue of children not attending school was school difficulty. School refusal or truancy could happen to any child. It was rather a school problem.

As a matter of course, strict guidance and fierce competition led to bullying. Also, children went to cram schools so that they could keep up with school work or to go on to a school of higher grade. They now had to study long hours, longer than the working hours of adults. All these issues brought on the increase of children not attending school.

What kind of measures did the schools take?

While the total number of children is decreasing in Japan, the number of children not attending school has increased, the more the Ministry of Education took countermeasures. Why did that happen? It was because the measures were taken from the point of view of the school educators, not children.

Schools are questioned of their guidance capability if they have children not attending school. So they (teachers) somehow want the children to come back to school. But children are hurt by bullying, inappropriate guidance by teachers, and strict vertical senior-junior (sempai-kohai) relations in club activities. Also, nowadays, there are many children who change schools due to their parents’ job transfers. When they change schools, they are prone to become targets of bullying.

As truancy was defined as a school problem, schools were criticized for their education when the number of truant children increased. As a result, schools took countermeasures just to reduce the number of children who don’t attend school.

Being hurt at school and having no place in the school where they can belong. One truly gets hurt and loses confidence when s/he has to spend time in a place s/he cannot feel the sense of belonging. Truant children have decided to back away from school to take a rest and put themselves back together at home. But schools have been trying all these years to bring these children back to school, not to let them be absent from school even for a day. They have attempted to bring back the children who are hurt and are in an incapable situation. As a result, the words of the children “I don’t want to go to school” have been rejected, not allowing them to stay away from school. In this way, the children who refuse to go to school, or truant children, are on the increase.

＞＞②What if the words “I don’t want to go to school” are rejected?