This article is an extract from the lecture and consultation “Ask Dr. Wahaha! How to think and respond to children’s illness” held in 2018. Japanese original, and English and Chinese translations are available.

We are made of bacteria and viruses!

It is said that our ancestry, if we trace back way down history, were bacteria. What is more, there are many things left in our bodies that were once bacteria and viruses. In today’s biology textbooks for high school students, there is a theory called endosymbiotic theory. Each of the 37 trillion cells in a human body has a nucleus, which is surrounded by something called organelles. A mitochondrion is one of the organelles, and it is like a factory that produces energy sources that enable us to be active. The endosymbiotic theory states that the mitochondria were originally bacteria.

Bacteria went into our bodies and gradually turned into human beings. More bacteria and viruses entered our bodies, changed their forms to survive there, and finally became a part of our bodies.

Various allergic diseases are increasing nowadays. One of the causes for the increase is believed to be the use of antibiotics from when a child is small. We take antibiotics to kill bacteria, but they go into our intestines, too. They would reduce the normal bacteria inside our intestines which protect our bodies. I mentioned in the previous talk that there are less helicobacter pylori in our bodies today. This may also be because of taking too much antibiotics.

As a result, it is now said that doctors should not use antibiotics for a small child who has a cold. Doctors are reexamining children’s medicines including antibiotics, only to find out that most of the cold medicines are not necessary. Actually, it has been found that there are more harms than benefits. A child with less medicine cured from a cold in the same way as a child with medicine. We found out that children’s natural healing power is so great. 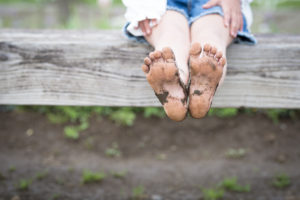 Recommendation to bring up your child in an unhygienic way

Have you ever heard of the “hygiene hypothesis”? The history of medicine after the World War Two has mainly been the fight against infectious diseases, that is, diseases that transmit, diseases caused by bacteria or viruses. Bacteria and viruses were regarded as something bad and were targeted as something to get rid of or conquer. So, two major weapons were used to conquer them; antibiotics for infectious diseases and bacteria, and vaccination for viruses. It had been said that they were almost conquered, but many exceptions arose and now we are at the point to rethink.

The hygiene hypothesis states that a person is likely to develop infectious diseases and allergic diseases when s/he, as a child, was brought up in an environment that is too hygienic. For example, soil is rich in bacteria. Dr. Satoshi Omura won the Nobel Prize in Physiology or Medicine for the bacteria that he found from the soil. Although we don’t know everything yet, there must be a lot of useful things in the soil.

Recently, there is even a recommendation for bringing up your child in an unhygienic way. I am sometimes asked how much unhygienic it should be, but of course, there is no need to make it unhygienic on purpose. What it basically means is that you don’t need to think too much about hygiene. Sterilizing has no benefit but only harm.

A child should touch foreign substances at an early age

Our bodies are capable of distinguishing what is foreign, what is not, and what we should not think it is. All substances that come into our bodies right after birth are foreign, but normally we don’t reject mother’s milk. Our intestines judge what comes in, then distinguish nutrition which should be absorbed and foreign matters which should not be absorbed. I believe that in our bodies there is something like a computer with a tremendous amount of data, which orders something to be rejected or taken in.

Sometimes we take into our bodies even if it is a foreign substance. We call it immune tolerance. The smaller a child is, the more immune tolerance s/he has. Until now, we had been advising that children should start eating food that may cause allergies at a later age. But now we believe they should start taking it at an earlier age. Of course, you must start with small amount, but the earlier you start giving, the better it is accepted to your child. For example, it is almost proved that a child who had pets right after birth is more unlikely to develop allergies to animals when s/he is an adult, compared to a child who did not. It is important to get used to things at an early age.

In that sense, it is better for a child to touch the soil, rich in bacteria, as much as possible. Playing outside and moving actively enhance immunity. Even if a child is sick, moving his/her body brings up immunity if it is a slight illness. S/he does not need to stay in bed or be cared too much. It would be best after all if you leave the child to do what s/he wants to do.