Q.: My child won’t tell me how s/he spends time in kindergarten. (5 years old)

I often ask my child how s/he spends time in kindergarten, but s/he seems to hide it or forget it and won’t let me know. According to teachers, it is not good if I ask too much. But sometimes s/he tells me, “there was something bad at the kindergarten,” so I’m worried and cannot help asking. What should I do? 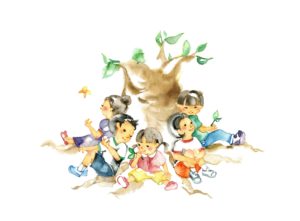 The majority of children who go to kindergartens, nurseries and schools do not reply when they are asked, “What’s happened?” These children literally “live each moment.” They think about what they do at that very moment. When they come home, their minds are full about what to play with, what to eat for snacks, as many things a child can think of. So, when they are asked what has happened in nurseries or kindergartens, the topic does not appear in their world anymore.

So, it is rather a senseless question to ask what has happened. Let your child have some snacks and rest a bit, then s/he would start talking him/herself.

If you want your child to talk, you must fully listen to him/her when s/he starts talking, and then, ask “What happened then?” in continuation. But if you ask in a way like “How do you do. What happened at school today?” your child would ignore it, saying “Nothing” or “Oh, I forgot”, which means, I don’t want to talk about it here now.

A child would often talk to the mother when she is too busy to listen. When the mother is preparing dinner, the child might stand behind and interrupt her, “Hey, mum, today…” At such a moment, it is important that the mother listens to her child “with her back”.

When the parent listens with occasional responses such as “Oh, is that so. Yes, yes…”, the child would spew out what happened at school, his/her dissatisfaction and anger, and sanctify his/her heart. When the child is facing the parent, s/he would feel as if the parent would say, “You should do this when that happens,” or “I think you did something wrong, too.” Therefore, s/he would not talk.

The mother listening with her back while she is busy, or the father listening while driving, which means he is concentrating on driving so would not really give any advice — a child would talk at such moments. These situations are examples of wise ways to listen.

Also, when a child is hurt from something bad at school, being scolded by a teacher, being bullied from friends, had his/her things hidden away, being told this and that, s/he would return home and say “I’m home” and start bullying his/her sibling right away. When the younger sibling is being attended by the mother or happily playing with toys, the child may suddenly kick the toys or push the sibling.

When this happens, most mothers would scold or warn the child, “Why do you bully your sister/brother when s/he has done nothing?” But this is often the case when the child had something bad outside.

So, in such an occasion, you can first ask, “You are different today. Did you have something bad outside?” instead of “You shouldn’t bully.”

“When you are annoyed, anyone would feel like doing something at home. Yes, your father has that kind of moment, too.” You can give your child such words and let him/her know that you have understood something bad has happened. This would be the first ball from you.

A child cannot phrase it out in words what is annoying him/her. So, in most cases, s/he won’t tell you what has happened. S/he might say, “Nothing,” “I forgot,” or “Oh, shut up,” but this clearly means that something has happened.

In such a case, you can tell your child, “I’ll listen to you anytime, so tell me later,” and try to open up his/her heart, saying, for example, “When you’re annoyed, you want sweet things. So, here’s one extra sweet for you.” When the mother is kind to him/her, s/he would think that the mother has noticed how s/he is, and that would soften his/her heart a little bit.

As a child starts to belong to a group, s/he may have a lot of things from outside and let them out at home. You will find it easier to interact with your child when you notice these things.