Q.: My child asks me to carry him/her when it is difficult for me to do so. (5 years old)

My child asks me to carry him/her in a crowded train or an elevator with a loud voice when I can’t do so because his/her feet would hit others. I tell my child, “Wait a moment,” but s/he won’t give up. How can I deal with this? 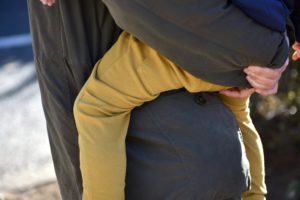 Being carried and hugged is a form a child can be most assured with. There was a post on the newspaper by a mother who has a daughter in the first grade. The daughter’s homework of the day was to “get cuddles from parents as much as you want”. So, parents hugged and cuddled their children and gave feedback to school about how they were. The mother wrote in the post that her daughter blushed a lot but looked very happy.

Carrying and hugging your child is the best way of communication. Even if there are no words, your child can feel the greatest sense of security.

Right after the Great East Japan Earthquake in 2011, I visited four or five health centers for health check-up for age 1.5 and 3. I heard a lot that small children, and even four- and five-year-olds, wanted to be carried and cuddled. The earthquakes occurred in March. Even in the check-up for age 3 in October, November and December of that year, I heard many adults saying, “Children ask to be carried so much to the point it gets annoying,” and “Why are they behaving like spoiled kids?”

I was told during a consultation that a child as old as age 3 would sleep on his/her mother’s stomach. When the child does so, s/he would be hugged. It was the form that would give the most relief, which was necessary for the child. So I suggested that the mother moves a little bit and have her whole body contact her child closely, which solved the problem.

Carrying your child and giving cuddles and hugs are the best way for the child to get safety and security, so I would like you to carry your child no matter how old they are.

Babies are cuddled all the time. So are the one-year-olds. But when children turn three, they are not picked up and carried until something special happens, or not even in those special occasions. So, they come and ask to be picked up. It is often the case when a younger sibling is being cuddled that they come and tell you “Carry me!” They are asking you, “Who is more important, me or the baby?”

In such a case, please accept their feeling and give them some words, “Okay, you need a hug, I get it,” even if you are holding your younger one. They would think, “Mom accepted me when I said ‘Carry me’,” and feel that they have been understood. This will make them peaceful.

You can also tell your younger child, “Your brother/sister wants to be carried. Can you change with him/her for a little bit?” and pick your older one up. Then s/he would be satisfied with the cuddle and it won’t have to be too long. On the contrary, if you pick him/her up after all the “Later” and “Wait a second”, s/he might cling to you and not let you go.

When the younger sibling declines to change, you can try to carry both of your children at once, with one on the right and the other on the left, or with one in the front and one on the back. The best way for a child to feel the love of the parent is to feel that the parent has understood and accepted him/her.

When a child asks to be carried, s/he is showing that s/he wants to feel the love. So, do not be reluctant and carry him/her even just for a short time.

In a crowded place like inside the train, you can tell the people around you, “Excuse me, my older one is like a baby now since the younger one was born.” Then, they would be really kind to you. If someone tells you, “Isn’t it strange for a big child asking so much to be carried,” you can just say, “I’m sorry to take up the space.”

When a child is afraid of strangers, s/he does need to be carried. In such an occasion, you can carry the child facing inside to you, not outside. Then the child won’t have to face the strangers and would feel more comfortable.

As you pick up your child, you can say to those around you, “My child is now shy with strangers,” or “A younger one was born recently.” In this way, you can avoid your child being blamed. Also, people around you would get kind to you. For example, an older lady who likes to talk, would start saying something like “My child was like that, too,” and lighten the atmosphere. When the mother gets relaxed and all become peaceful, a child may not need to be carried anymore. Your child might slip down to the ground by him/herself. This sometimes happens.