My child turned 1.5 years old and started to play with other children. S/he always tries to grab the toys of his/her friends’. I tell him/her, “Return it to your friend after you play with it,” or “Your friend is playing with it, so let’s ask him/her later,” depending on the situation. But I really don’t know what to do. 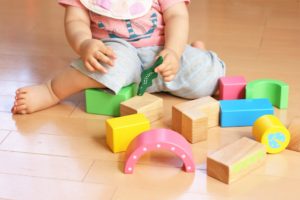 You are addressing your child in a very gentle way, with a child-oriented mind. With phrases like “Excuse me, can you let him/her play with it?” or “Your friend is playing with it now, so let’s ask him/her later,” you are saying what your child can’t yet say with words and sorting out the relationship there. This is actually very important.

Children under age 3 still cannot play well enough just among themselves. If you leave them on their own, they would start taking things from the others. They still cannot use the common language in playing such as “Can I borrow?” very well.

At age 3 and onwards, children are able to make easy rules among themselves. Children share common rules such as “Let’s take turns,” or “Later,” and communicate among themselves, which enables them to play on their own.

Children are not interested in the toys. They are interested because “playing” is happening there. For example, a child often tries to grab the toy another child is playing with, even though s/he has the same one. This happens because the child is not trying to take the toy but trying to take the “playing”. So, what is important for a child under age 3 is the person who would play together with him/her with the toy. That would be his/her parent.

When a child is playing with his/her parent, many children would gather because the operation of toys and communication of words are happening there. So, those children would try to grab the toys, but the parent can sort out the “playing” by words such as “My child is still playing with the toy, so can you wait,” or “Why don’t you play with this instead.”

As they experience these kinds of interactions repeatedly, they learn the rules such as “Wait”, “Later” and “Here you are.”