* This article is an excerpt from and is edited based on a lecture & consultation meeting titled “How to Communicate with and Discipline Small Children” which was held in 2019.

I have twins, a boy and a girl, aged 3 years and 8 months. They’ve learned to verbally communicate, and they listen to me when I talk with either of them one-on-one, but they get so energetic when they’re together and often they don’t listen to what I say. What can I do to make them listen to me? 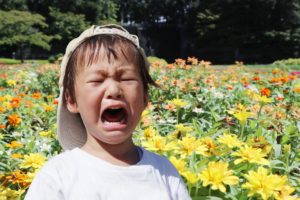 They listen to you one-on-one, but when they’re together, their power isn’t just doubled, it’s squared. So, I can imagine how difficult it must be to calm them down when they get overly excited.

How to deal with the situation? It’s the same as putting out a fire – it’s important to get the fire under control at its initial stage.

It’s the same thing as how bits work for horses. If you act quickly and douse the fire right when you think it’ll get dangerous, the chance of it spreading would be halved or reduced maybe by one-third.

For example, there are many children who will throw a tantrum at a store to get their parents to buy them something. In such a case, tell them before you leave the house that you will only be buying groceries at the supermarket today and that you will not be buying toys or snacks for them. When you tell them that beforehand, they will learn to give up.

In addition to telling them in advance, when you get to the store, remind them:

“Mommy needs to buy this and this, can you help me? No toys and snacks, ok?” Once they say “okay”, go into the store and quickly shop for things that you need only. When you wander around the store looking at things you don’t need, your children will start doing the same thing.

I met a 3 year-old child at a public healthcare center, who loved small toy cars. His father loved him so much especially because he was a child born at an older age. So, the father would buy him a toy car every time he went out with his son, so the boy had 50 of them at home. Every single time the boy went out with his father, he would ask for a toy car.

So, one day the father told the boy before they left the house that he won’t be buying a toy car that day and once again reminded him when they arrived at the store. The boy learned to deal with it.

As this story shows, children are smart enough to understand, learn, and apply what they’ve learned, so it’s important to tell them what you need to tell them every single time.

If your children throw a tantrum at a store, you need to tell them “we’re leaving without buying anything” and actually do it. After two or three times, the children will understand the circumstance and they will learn to give up.

Children are very smart, so don’t underestimate them. I think that you would enjoy a different aspect of child raising if you treat your children as having capacity for judgment and understanding.