Q: I am concerned that my child is not willing to try things he can’t do. (age 5)

Whether he’s playing games or attempting to do pull-up bars at a park with friends, if he feels that he won’t be successful in doing it or he feels that he might lose, he gets into a bad mood and falls into a I-don’t-want-to-do-it mode. I’m worried that he doesn’t feel motivated or doesn’t want to try different things. What are some ways I can talk to him to get him motivated? 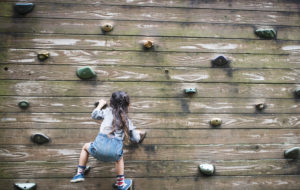 It means that your child has self-respect and self-esteem. You should consider this as a positive aspect of your child.

Such children will grow to be very different when they’re older, for the better. He might be unmotivated when he’s small, but once he finds something he feels passionate about, he will try really hard.

Children will feel uneasy if their mother tries to push them to do an activity that they’ve determined it’s too early to try. So, support your child by telling him “I see that you’re trying to observe other people. It certainly helps to watch people do it because you can learn the tricks”, etc.

If your child can’t do pull-up bars, respect his feelings that he simply doesn’t want to do it at the moment by saying something like “It’s scary isn’t it, I can understand why you wouldn’t want to do it right now”. Be sure to actually say it to him, not just think it in your head. He will feel relieved when you communicate that to him.

It would also help to tell him things that you’ve noticed yourself: “Let’s watch everyone do it. Look at that boy, he turns really well on the pull-up bars” or “See how he grabs the bars differently”, etc. By making observations together with your child, you’re acting the role of a coach.

Help him out by saying, “If you feel uncomfortable about people seeing you, let’s practice it with mommy when no one’s watching”. Let him know that you’re looking after him.

Don’t you get excited when you watch a sports game? Watching can be just as exciting as playing. So, when your child says, “I’ll just watch”, tell him that “watching is just as fun as playing, isn’t it?”, and your child would feel at ease.

I often hear from parents who are concerned about their children just sucking on their thumb and watching everybody else do a certain activity at pre-school or kindergarten.

Children are willing to do things when they’re at home, but when they’re around friends or classmates, they just watch and do nothing. The interesting thing is, though, that they say “I had fun today” on their way home. This goes to show that watching can be an important experience because by doing so, children can enjoy themselves comfortably, without feeling anxious.