Q: How should I deal with my child’s manipulative behaviors? (age 3 yrs 10 mos)

She’s getting wiser as she grows older and I’m having trouble dealing with her manipulative behaviors. Ever since she’s been little, I’ve been strict about not giving her dessert until she finishes all her food, so she usually makes an effort to clean her plate to get to her dessert, but one time she told me she was full before she finished her food, so I allowed her to have dessert. Now she tries to use this tactic all the time, and I don’t know at what point I should allow her to have her dessert. 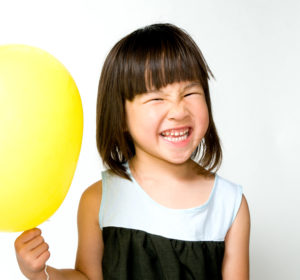 Growing up means getting wiser, so it would be troubling if she didn’t, but from an adult’s perspective, it can be seen as manipulating. But if she’s getting bad ideas, it also means that she’s getting good ideas, too.

When you have trouble dealing with such behavior, tell your child: “you’re getting bad ideas into your head, but mommy knows about it all”.

Suppose your child sneaks to the fridge and eats some snacks. When you ask, “who ate the chocolate cake?” she would say, “I don’t know”. But you tell her “I see there’s some chocolate on your face” and she will realize she’s been found out. You can be just as manipulating to effectively communicate to your child that you know what she’s up to.

Raising children is about a battle of wits, a competition of endurance. So, who wins: parents or children? Children always win.

Why is that? Children can use all their time to think up of ideas. Mothers don’t have the time. It’s a characteristic of children to try outsmarting their wise mother, so when they do so, just pretend to be surprised and look delighted.

However, you should be careful not to scold her because if you do, she will start doing things behind your back. Casually hint at her that you’re watching and know what’s going on, that you’ll let it pass this time around, but just this time. You should make it clear to her that on one hand, you’re willing to be lenient, but on the other hand, you’re always on the lookout for what she’s doing.

Since 1973, Ms. Uchida has continuously held counseling sessions at multiple healthcare centers in Tokyo. In addition, since 1998, she has presided over «Momo’s Room: Child Counseling» and offers group sessions to advice on truancy, delinquency, withdrawal from society, etc. Ms. Uchida is also a part-time lecturer at Rikkyo University, has experience in being an advisor for NHK Radio phone counseling on children’s psychology, and is a speaker at numerous seminars at child care circles, parents’ groups on truant children, and kindergartens across Japan. She has written books titled “Counselor Ryoko-san’s Solving the Mysteries of Parenting”, “The Life and Mind of Small Children Q&A”, “Kindergarten and School Refusal”.