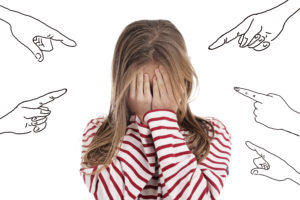 A child may say to you, “I don’t want to go,” or “When is the day off?” In such a case, s/he is able to tell directly or indirectly that s/he does not want to go. This is a phase s/he still manages to go to school.

When s/he does not say so in words but tells that his/her body is not okay, it would be important for the parents to accept his/her physical symptoms properly.

To begin with, stress worsens the diseases that s/he originally has, such as asthma, atomic dermatitis, and chronic kidney disease. It won’t get better even if medical care is given for it. Also, s/he would get a cold. Once s/he catches it, it won’t go away easily. It can stay as long as three months or even half a year. Together with a cold, s/he would start coughing. Coughs stay even if the cold is cured, similar to tic disorders. When such coughs continue, others often see it as a cold.

Also, such a child tends to get injured easily. You must be careful about this. S/he would be absent-minded both at school and at home with a lot of worries and troubles inside him/herself. His/her conditioned response, which allows him/her to notice what is going around, tends to delay one step or half a step. Accidents such as falling down from the stairs and drowning in the swimming pools actually do happen at schools during group actions.

I am sometimes told that a child often falls down from the stairs and gets injured. But listening to the child carefully, I found out that s/he was actually pushed by someone and fell down the stairs. Such a case tends to happen when the child is being bullied but is going to school against his/her will.

What is more, s/he tends to have a traffic accident. S/he fails to recognize the traffic lights. If s/he is thinking that s/he doesn’t want to go to school, or s/he hates everything and wants to die, this can be a psychological situation that brings in an accident. Such an accident happening at the traffic lights won’t lead to fatality, but bouncing on the engine hood or to the side, but this could occur on the way to school.

Now, back to the physical symptoms that I mentioned earlier. Children who visit the pediatrics first complain abdominal (tummy) pains, headaches, and fever, which are the symptoms of orthostatic disturbance/dysregulation (OD). They also wet themselves, have diarrhea and constipation, which are the urological symptoms. They take a day off from school and go to the doctor, and take medical examinations. But they are told that they have no problems and that they should go to school. In this way, they go to school on and off. In such a period, these children often show physical symptoms.

Other symptoms include sore foot and legs, not being able to walk, and becoming speechless. The last one is called selective mutism, where the child loses his/her voice, cannot or would not utter words in a particular place. S/he may also show spot baldness. In addition, s/he may experience hair loss due to unconscious pulling by him/herself, which has a similar mechanism to tic disorders. One of these symptoms may happen.

I am sure that there are many children with such symptoms who still go to kindergarten, nursery, primary school or secondary school, not taking a day off. But I would like you, the parents, to pause a moment to think that “if such a thing the child didn’t have before has happened, s/he might be having some trouble inside.”

When the parents sense that there may be something hard for the child in his/her daily life, and show that they care for their child rather than disciplining, the child may reveal that s/he is having a hard time and the cause for it. Then, the parents can tell the child, “You don’t have to go if you don’t want to. You can stay at home. You are the most important for me. Rather than forcing yourself to go to school, your feeling and health are much more important.” When listening to words like these, the child would be very relieved. S/he would think, “My parents won’t think I’m a miserable child even if I tell them I’m bullied,” and be able to tell the fact.

Any children want their mothers to think that they are good children.

So, when they are bullied or left out by peers, they don’t want their parents to see them as miserable. They want to be seen as being loved by friends, getting along with friends.

So, there truly is no child who tells his/her parents that s/he “is bullied”.

Yukiko Kishida, a news anchor at Nippon Television Network, wrote in her recent book called “Never let children die from bullying (Kodomo wo Ijime de Shinasenai)“ that when a child tells that s/he “is bullied”, that is the final red line. She wrote that in such a case, the child must be evacuated to a safe place. I absolutely agree to this.

A child also won’t tell that s/he is receiving strict guidance from teachers.

S/he wants his/her parents to think that the teacher recognizes him/her as a good student and that s/he is spending school life without any problems.

To keep on being a good child for his/her parents, a child won’t easily reveal his/her difficult situation. Therefore, when the situation gets worse gradually and reaches the limit, s/he would kill him/herself before taking a day off from school.