The Path of a Child’s Growth

In the path of a child’s growth, age 3 is seen as one of the milestones. This is because, in Japan, a child who has turned three participates in a group, meet friends of similar age and spend a few hours during the day with them. In other words, his/her social life as a child begins at this time.

On the other hand, a child’s growth from age 0 to 3 takes place basically at home. How does a child grow up at home to reach the age of 3?

Age 0 to 1 is when the body grows significantly

A baby, in any country or culture, has the innate power to grow up by him/herself. While the lives of adults are so diverse among different languages and cultures, there are many common features in the growth of children.

The common language for children is “playing”. Even if they don’t understand each other’s language, they can communicate through playing. When they meet for the first time at a new place, they can build up relationships through playing. Children have flexible adaptability.

A human baby is seen as “physiologically premature” since s/he cannot walk or eat by him/herself after the birth. The basis of the body that is necessary for living in the natural world develops at age 1. By this time, s/he is able to walk in most cases. A child with a careful personality would not start to walk until s/he feels “it’s ok now” even if his/her body conditions are all set to walk. In such a case, it might take a child to begin to walk until s/he is around 1.5 years old.

Another characteristic of a child between 1 and 1.5 years old is that s/he starts to speak. Words that are easy to pronounce, such as “papa” (daddy), “mama” (mummy), “wan-wan” (doggy) and “nyan-nyan” (kitty), would appear at such age.

At the health check up for age 1.5, parents are asked, “How many words does your child speak?” If a child speaks about three words, it is just fine for its age period.

Why is it fine? While the sounds like “a” and “u” are uttered from the baby period, words like “papa” and “mama” are pronounced by the cooperation of the articulatory organs such as lips, vocal cord and chin. For a one-and-a-half-year old child, it is fine if the cooperation is made, enabling the child to pronounce words. To tell the truth, speaking just one single word is quite fine for a one-year-old. A baby who was uttering “ah” and “wah” becomes capable of saying “mama” and “wan-wan”. This is such a significant technical advance. 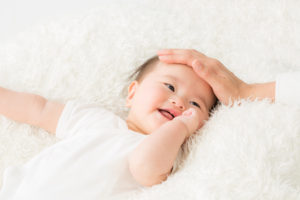 In which language should I raise my child?

When either the father or the mother has not grown up in the Japanese culture, many tend to ponder in which language they should speak to the child. Such questions are often heard in healthcare centers, too.

The best answer would be led as follows: First, who is the person that spends the most time with the child? In many cases, it would be the mother. Then, what language does the mother speak and think in when she thinks about her feelings and emotions in her head?

By the time a child is around two-and-a-half-years old, s/he begins to speak a sentence with two words, such as “Papa oshigoto” (Papa work). S/he would be able to speak easy sentences, getting good at talking and communicating. S/he would speak to others and also listen what others say. A child at age 2 would start to enjoy such interactions.

Starting to walk at age 1 and getting better at communicating with words at age 2. When a child can walk and talk, they would love to be naughty with “mischiefs”.

What are the mischiefs that a child does? It is imitating what adults do. Cooking, washing, s/he would imitate what Mother does to learn life habits. The ability of a child to grow is the ability to imitate. This is “learning” in a technical term, but basically it is imitating.

Play house and pretend play are the highlights of imitating. If a child already knows words, s/he would listen to the way Mother and Father greet others, or how they talk to each other. S/he would learn not only the words, but also the grammar, and ultimately the life habits.

A child would imitate everything that Father and Mother do. Out of those things, what is good to be imitated, such as imitating cooking in a pretend play, gets established as “playing”. However, when a child sees Father smoking a cigarette, s/he would want to imitate smoking. This would be a “mischief”. When Father uses a lighter, the child would also want to touch it. Again, this is a “mischief”. To the child, cooking and smoking are the same in that s/he imitating something. However, s/he does not know what is good or bad to do. This is what happens at age 2.

When a child turns three, the self is rooted.

When a child turns three, the development of the self is seen. The self, or the ego, roots itself in the child’s mental world, so that s/he would gradually become capable of controlling and understanding what is good and what is bad to do.

On the other hand, self-assertion also becomes stronger as s/he starts to think and judge for him/herself. There is a saying in Japan, “The soul of a three-year-old child is kept up to 100”. When a child turns three, s/he would firmly possess the self to keep on judging by him/herself and asserting him/herself until the age of 100. The saying must be expressing that a child would grow in such a way.

The body grows first, followed by language acquisition. Then, the self grows and daily life starts to get developed based on the existence of the self. When a child reaches the period s/he can properly judge by him/herself, it would be almost fine for him/her to join groups, leave his/her parents and live without looking at them. In this way, many children begin their group life. This is the path of children’s growth up to age 3.